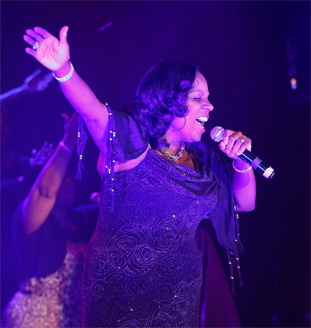 We were invited to come out and watch the final dress rehearsal of Vy Higginsen’s new musical Alive! 55+ and kicking! After the publicist told me about the general theme of the show, my interest was sparked and I headed uptown with my wife and my son. To get to the show, you need to catch that 2/3 train straight on up to Harlem! Harlem, NYC! Home of the Apollo theater, an area that is rich in musical history dating back to the early 1900’s. Read up on the Harlem Renaissance for details on all of that! We are here to talk about the show!

Alive is being held at the Oberia Dempsey Center, located at 127 West 127th Street, New York, NY 10027 (btwn. Malcom X Blvd and 7th Av). The venue used to be a school, and the performance area is still very much like a public school auditorium. That was an interesting dynamic, however once it is showtime, you could just as easily be sitting in a Broadway theater. Even better yet, because of this configuration, everyone can actually see the stage, unlike some Broadway shows where a big pipe, or a corner blocks the stage.

After a brief speech from the staff, informing us that this was in fact a dress rehearsal, and at any point they could reset, or pause, the show began. The show opens with several gospel numbers. A large number of individuals come on stage and begin to sing. The energy was very high, and the audience seemed to really enjoy the numbers. Many were out of their seats, many hands were up, and the experience was very reminiscent of a visit to church on a Sunday morning.

After several gospel styled songs, they shift over into what we will call the storytelling side of the show. The way that went was that each individual would take a turn. The singer would come out and tell a short brief story about their life, true stories mind you. Each performer shared their story in their own way, with some musical accompaniment. Then they would perform a song based on their particular story. This was the part that I enjoyed most because the songs were mostly songs that I knew and loved. One woman did a rendition of “I will always love you” that had everyone in tears and off their seats giving a standing ovation!

The performer ages ranged from 54 to 74 years old, between 18 or so of them, you know that there was plenty of knowledge to be shared. The group was made up of experienced, grammy award winning performers, and less seasoned newer performers. It was really cool to watch such a diverse group of talent, and to listen to their amazing stories. Some of the tales were humorous and cute, and others were simply heart wrenching and brought us all to tears. One thing that I think is undeniable is that they can all sing, and they all inspire!

For more information and to buy tickets to Alive, check out the Mama Foundation website here! Alternatively you can buy tickets directly from here!

Just a life long New Yorker sharing the journey through my lens. Please take note of a post’s date. The views I express here are subject to change and evolving as I grow and learn.

Would Love to see in Person, Please keep me posted, Also Album Pleaseeeee